21 TERRORIST SUSPECTS FOUND AT BORDER OVER ONE YEAR 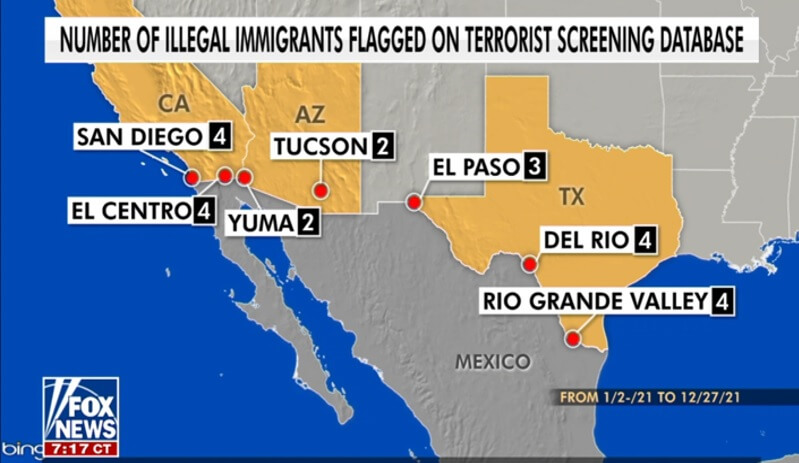 By Taxpayers Association of Oregon Foundation

The Taxpayers Association of Oregon Foundation did a tour of the Arizona-Mexico border with a retired U.S. Border Patrol Agent and a journalist. Here’s what we found:

In 2021, twenty-one illegal aliens were identified as having a criminal record of terrorism or matching a terrorist suspect profile.

Here is one example from Rueters, “U.S. border agents in recent months arrested two Yemeni men on a terror watchlist in separate incidents as they crossed the border with Mexico illegally, Customs and Border Protection (CBP) announced on Monday….One of the men, aged 33, was arrested on Jan. 29 after allegedly attempting to cross the border illegally near a port of entry in Calexico, California, CBP said. order agents found a mobile phone SIM card located beneath the insole of the man’s shoe, the agency said.”

Axios reports, “The Customs and Border Protection agency confirmed to Congress today that four people arrested at the southern border since Oct. 1 match names on the FBI’s Terrorist Screening Database”

WKTV reports, “A potential terrorist who illegally came into the United States from Mexico last week was wearing a Central Oneida County Volunteer Ambulance Corps jacket when arrested, according to U.S. Border Patrol.”

— This is part 4 of an ongoing series on our special report on the Southern Border.

— Nearly 80% of Americans favor more Border Security along with favoring immediate action — a consistent majority view among Democrats, Republicans and Independents.   Instead calls are being made to slash Border agents, which in light of the fact that as many as 500 people die each year trying to cross the Border, reducing agents will only cause MORE DEATHS not to mention encourage more lawbreaking, enrich criminal human smuggling and drug cartels, increase the number of unidentified people entering our country while straining resources which handicaps people who wish to enter the United States lawfully and legally.